One of the most valuable features of the Harmony Decision Maker is the Community Library. This is where our 10,000+ users from around the world can share the analysis and implementation status of how they resolved a “dark cloud” – a difficult decision they faced – in their personal life or at work. Users can share their decisions anonymously or with their name. “Sharing really is caring”. By sharing your analysis with others, you help users in two important ways.
Firstly, they realize they are not alone. In our real life (not the “best life” version we share on social media) we all face “dark clouds.” Sharing how you have analyzed and evaporated your dark cloud can give someone else hope.
Secondly, by sharing, we can learn from each other. Not just learn from each other’s successes, but also from our past failures. We all sometimes procrastinate in making good changes or choices or over-react and make bad changes or choices that we regret later. By sharing, you can help someone else avoid such mistakes.
Every month we feature a different user example. To see more, you can download the free Harmony Decision Maker and check out the community library.

Jessica is a passionate and caring stay-at-home-mom. Before becoming a mother, she was a very ambitious and very successful investment banker. And then everything changed. She became pregnant – a bit unexpectedly. She and her husband always wanted kids, but they weren’t planning on getting pregnant quite so soon. She knew it would have an impact on achieving the career goals she set for herself but felt confident she could make it up when she returned one day. Her only fear about having kids was simply whether she could “succeed” at being a great mom. In fact, the same was true of her marriage. Would she be able to succeed at being a great spouse? To succeed at both, she decided she would do what has always worked for her. She had always succeeded at everything she was passionate about by working harder than everyone else, making sacrifices, and fully committing. She quit her dream job and decided that she would do whatever it would take, including making whatever personal sacrifices required to give her kids and her husband the support and encouragement they needed to succeed in this competitive and sometimes cruel world.

But the required level of “encouragement” came with a price. She soon realized that unlike her, her husband and kids were not self-motivated to succeed. They needed a LOT of “encouragement.” To help them live up to their full potential she realized she had no other option – she had to become a “tiger-mom” and “tiger-wife.”

But was that Really True?

She decided to use the Harmony Decision Maker to find check if this assumption was really true. And even if it was, was there not a better way to support and motivate them to succeed?

Step 1: My Problem – and Why it’s Important to Resolve

My Problem: What is the problem or “dark cloud” you are facing?

Mother is accused by friends and family that she is pushing her kids (and husband) too hard to live up to her high expectations.

Local Impact: Why is the problem bad or important for you to resolve?

Although she tried to ignore these accusations by others – and sometimes react to defend herself…they still hurt her and makes her feel guilty and wonder if she is really doing the right thing.

System Impact: Why is the problem also bad or important to resolve for others?

The relationship with her children and husband has really deteriorated in the past few years and she is recently getting the opposite reaction than what she wanted. She wanted her “pushing them” to inspire them; but they told her that her standards were so impossibly high (she is never satisfied) that why even try.

Step 2: What to Change? Conflict Analysis (My Conflict and Their Conflict)

In Step 2a Jessica defined the conflict she faced in dealing with her problem and what she believed the unique Pros and unique  Cons were of the “Change vs. No Change” options she had.

In Step 2b, Jessica had to answer whether the question “Do you blame anyone for your problem?” She blamed herself. She then completed “Their” conflict – the conflict of the one being blamed for the problem – starting with the past actions she believed caused her problem and then describing the change she believed could have prevented the problem. To complete step 2b, she defined what the unique Pros and Cons of each of these two “Change vs. No Change” options. 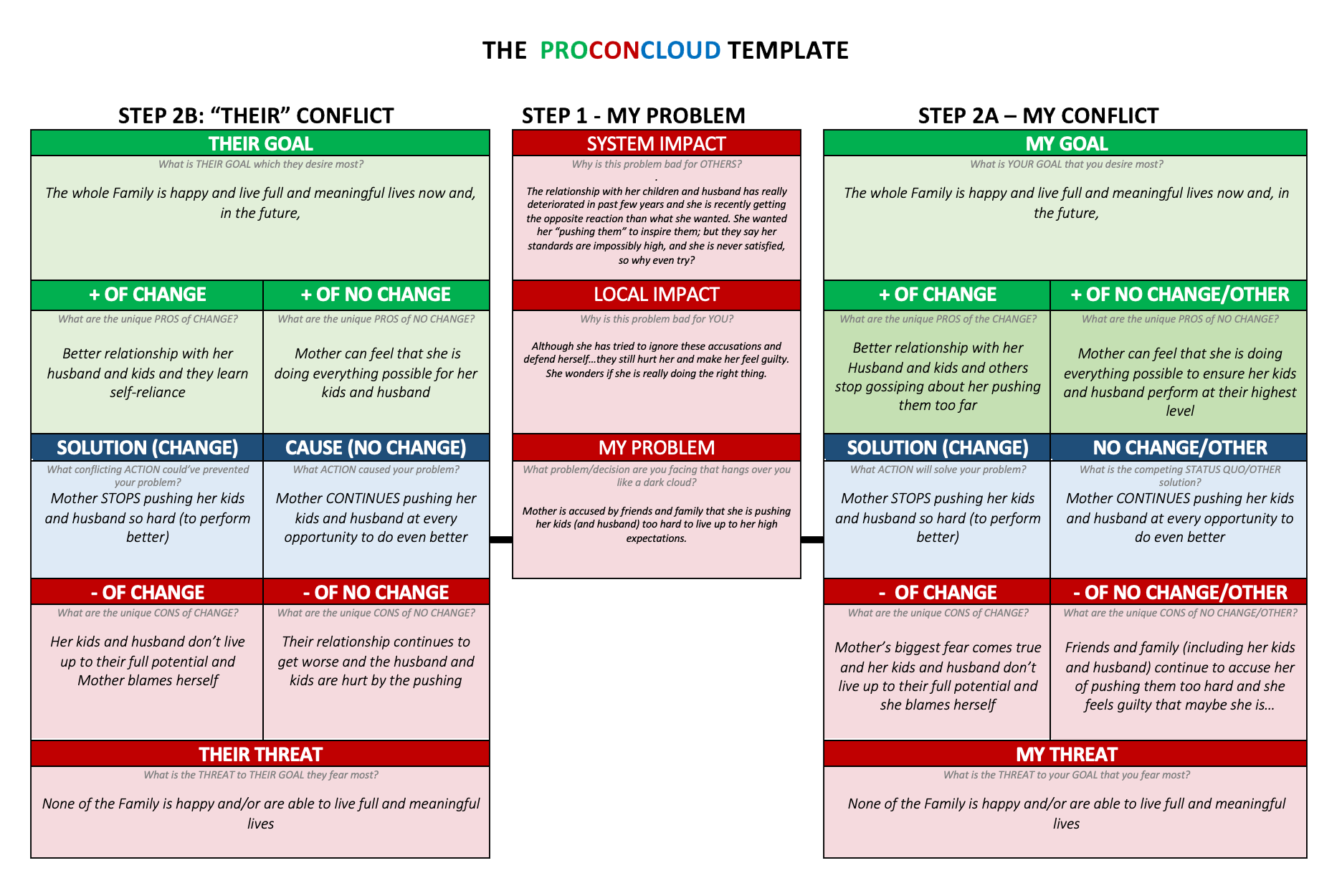 Learn more about the ProConCloud Method

Important Note: When we blame ourselves for our conflict “Their Conflict” and “My Conflict” may look very similar or even be identical. This is normal because it is the same personal problem in both cases. Step 2b is intended to give users a different perspective and opportunity. The benefit in cases like this is that when you solve one side, it solves both.

In step 3, she explored the four options (CHANGE++, NO CHANGE++, WHEN+WHEN NOT and ANOTHER CHANGE) to find the “best” resolution to her conflict.

She shared her analysis with her kids and her husband. She wanted her family to know that she really tried to objectively look at the current situation from all sides. To her surprise, they shared her view that her pushing them had some, but just not so hard. She selected option 3 because they all recognized that she needed a better way to judge when to push them and even more importantly, when not to push so hard.

So what was her “new rule”? 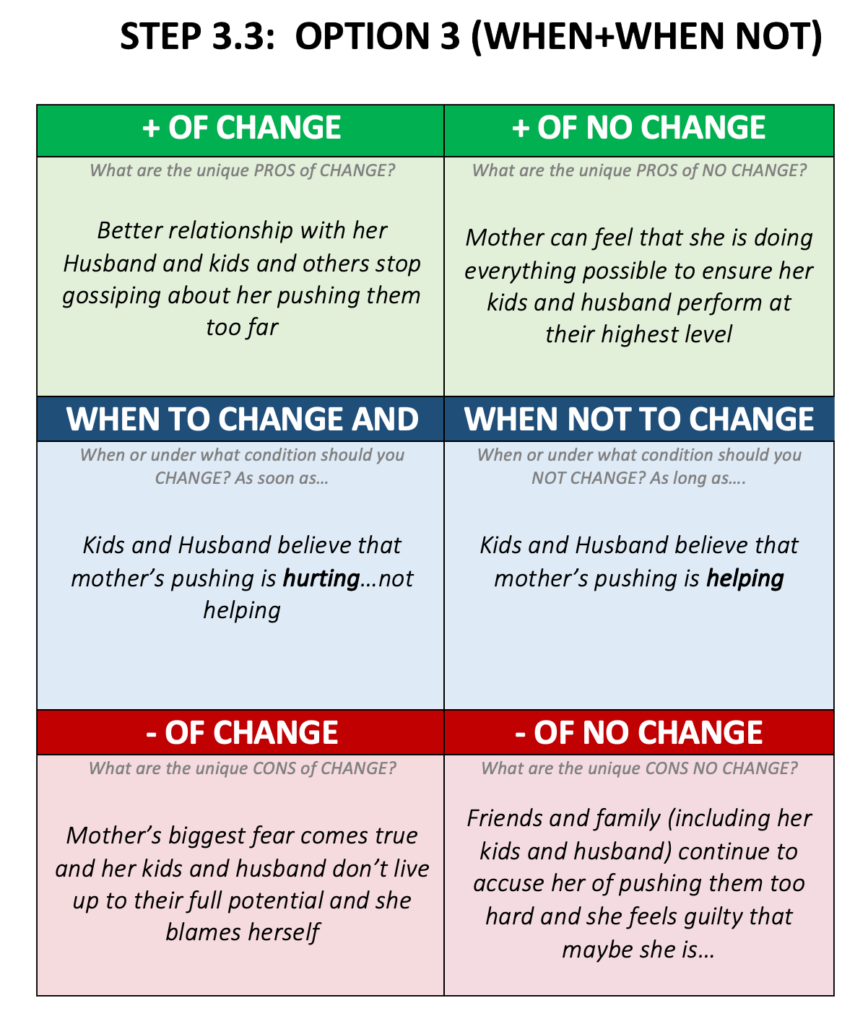 So, what were the Assumptions or beliefs Jessica challenged?

Of course her kids and husband, and herself, had a few yes-buts about this. They used Step 4 to find the “Yes-Ands” to overcome these to make the solution more robust.

When reporting the current status, Jessica shared that initially both her kids and husband were a little suspicious of whether she would really be able to comply with their “new rule”. She even admitted that it was a bit of a struggle initially to back off when they told her more pressure would be harmful rather than hurtful. And they also admitted that sometimes they were not that honest with her and sometimes told her that her “encouragement” was not helpful when in fact it was. Despite these “non-compliance issues” it was still much better than the terrible vicious cycle they found themselves in before. They committed to work together to hold themselves and each other accountable to the new rule as it has a BIG upside for everyone when it works.

Jessica believes this analysis and insight has brought the family closer than ever before.

Interested in more Community Library Spotlights? Check out our video series for more examples like this one.